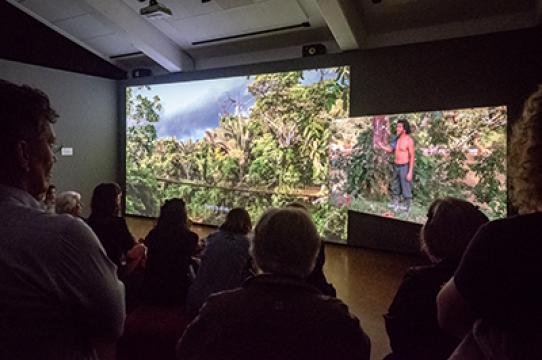 Forest Law 2014, a 38-minute multi-channel video installation and photo text assemblage based on research carried out by Ursula Biemann and Paulo Tavares in the Ecuadorian Amazon, is currently on display at the Mary Porter Sesnon Gallery through December 1.

The exhibition--a collaboration between UCSC’s Institute of the Arts and Sciences, the Mary Porter Sesnon Art Gallery, and the Center for Creative Ecologies--examines the legal cases that plead for the rights of nature against the dramatic expansion of large-scale extraction activities in the region, including a trial won by the indigenous people of Sarayuku, Ecuador, based on their understanding of the living forest.

“Coming to UC Santa Cruz from showings in major international biennials in Sao Paolo and Sharjah, Forest Law is timely and powerful,” noted John Weber, director of the Institute of Arts and Sciences. “The piece is being shown worldwide and is currently on view in Sweden, too. It was also in Mexico City, Beijing, Jakarta, and at the Broad Museum at Michigan State, which commissioned the piece.” 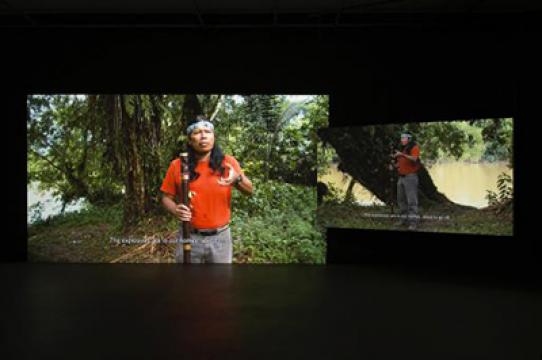 "We are particularly happy at how many faculty are bringing students to the show and incorporating it into their teaching,” Weber added. “This is another example of how the Institute of the Arts and Sciences is providing our students with exposure to artworks of international caliber that examine the issues of our time. In this case, Forest Law is reflecting the campus’s academic priorities in its search for climate justice.”

Biemann is an artist, researcher and video essayist based in Zurich, Switzerland. Tavares is an architect based in Quito, Equador, whose work deals with the visual and spatial politics of territorial conflicts and climate change.

Together, they researched a series of landmark legal trials in the Inter-American Court of Human Rights, in which claims were made for the rights of nature in the face of human destruction occurring on the sovereign land of indigenous nations in the Amazon. Forest Law examines the sum of the legal, ecological, cosmological and scientific dimensions in these conflicts about climate change.

Ecuadorian Amazon is one of the most bio-diverse regions on Earth and provides essential functions in global climate regulation. It is the home of indigenous nations and a land of great ethno-cultural diversity. Containing vast deposits of oil, gas, and minerals, it has also become the target of many corporate extractive industries, intent on capturing the mineral wealth, despite the disastrous effects these industries have on the area and its people.

In 2008, indigenous lawyers and experts successfully fought to amend the constitution of the State of Ecuador, establishing fundamental rights of nature for eco-systems to fight this extraction. 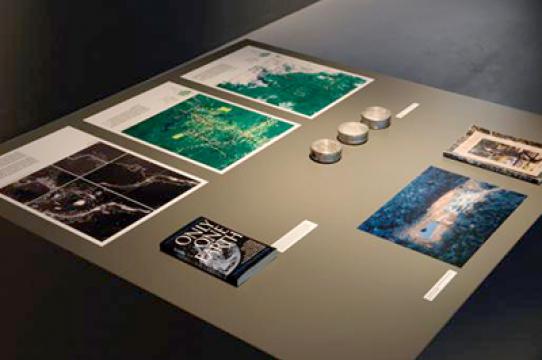 "To experience this exhibition at the Sesnon Art Gallery, situated on the edge of a logged redwood forest, gives us pause to consider the rights of any forest,” observed Shelby Graham, director of the Mary Porter Sesnon Art Gallery.

As an undergraduate student in IAS curator Rachel Nelson’s history of art class (Contemporary Art in a Global Field) wrote, “This was an insightful exhibition about the Ecuadorian Amazon...I went into the exhibition knowing next to nothing about the Amazon Rainforest and left with a sense of wanting to get involved and find a way to help.”

Another student noted, “I found the exhibition especially powerful for how the installation incorporated the audience into the artwork--I felt like I was in the Amazon, or at least in a world in which I could feel the reverberations of ecological degradations as heavily as those who inhabit the Amazon do.”