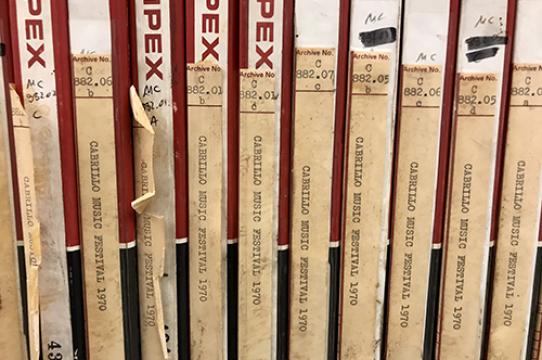 UC Santa Cruz has received a grant from the Council on Library and Information Resources (CLIR) to digitize 670 audio recordings featuring a wide variety of works performed at the Cabrillo Festival of Contemporary Music from 1964 to 1990.

This project is supported by the Recordings at Risk program, a national re-granting program administered by CLIR and funded by The Andrew W. Mellon Foundation to support the preservation of rare and unique audio and audiovisual content of high scholarly value.

The recordings were originally made by Berkeley community radio station KPFA. They were later transferred to the Bay Area music non-profit organization, Other Minds, which in 2016 donated its archives to UC Santa Cruz’s Special Collections & Archives at McHenry Library. The reel-to-reel tape format is particularly susceptible to degradation, and this grant ensures that the recordings will be preserved for future use.

“We are thrilled to be awarded this grant to digitize previously inaccessible reel-to-reel audio recordings of Cabrillo Festival of Contemporary Music performances,” said Teresa Mora, head of Special Collections & Archives. “A local treasure, the Festival is a world-renowned institution, and we can't wait to be able to share these recordings with the public.”

The project is scheduled to be completed in April 2020. The recordings will be described in a finding aid on the Online Archive of California and made available to patrons on-site and remotely via the Library’s Digital Asset Management System. It is anticipated that they will be an essential resource for musicologists, historians, composers, and students.

“One of of the first music festivals to program contemporary, experimental, and world music alongside standard classical repertoire, the Festival became an important nexus for conductors, composers, performers, and the public.”

Heying added that the recordings are an important resource for interdisciplinary study of orchestral traditions in the U.S., and will benefit scholars of ethnomusicology, music theory, experimental and avant-garde music, conducting, composition, sound studies, and music technology.

“Once digitized, they will also be a pedagogical resource at UCSC and beyond for graduate and undergraduate courses in American music history, 20th century music, world music, history of electronic music, and classical music survey courses.”

This marks the second grant that UC Santa Cruz has received from the CLIR to preserve the Cabrillo Festival tapes. The latest award is an extension of a pilot grant the campus received in 2017 to digitize 69 open-reel audiotapes.