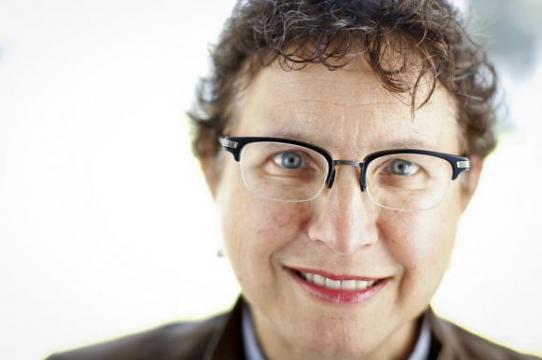 The work of feminist writer, film critic, LGBT activist, and UC Santa Cruz professor of film and digital media B. Ruby Rich will be celebrated this week at the Barbican Centre in London.

The event is the brainchild of Selina Robertson and Sophie Mayer of Club des Femmes, now celebrating 10 years of organizing feminist/queer film events in London.

“They are amazing women,” said Rich. “I did not know them, never met them before, but was amazed by Mayer's book, Political Animals, a fierce shout-out to feminist filmmaking today. It's been a huge pleasure and honor.”

During her visit to London, Rich will also attend a one-day symposium in her honor titled Being Ruby Rich: Film Curation as Advocacy and Activism, presented by Birkbeck, University of London.

As a film critic, Rich has been a programmer and juror at major film festivals around the world and has been published in The Guardian (UK), The Village Voice, and The New York Times. She has also provided film commentary for NPR’s All Things Considered and the Criterion Collection.

In 2012, she received the Frameline Award at the 36th San Francisco International LGBT Film Festival, an honor awarded annually to a person who has made a major contribution to LGBT representation in film, television, or the media arts.

In a recent interview with Sophie Mayer, Rich explained what first drew her to film and feminism.

“Film for me was a zone of sociality, a place as much as an idea, a way to constitute community,” said Rich. “When the women’s movement began to flourish and I was swept up into the planning of a women’s film festival, cinema in a way became my gateway drug into feminism. And there was no turning back: from then on, those worlds definitely began to blur and merge and influence each other so much they became inseparable.”

Rich also spoke with Mayer about the current need for a “cinema of urgency.”

“New times demand new visions,” Rich noted. “We need new film languages and rhetorics. I think film is really lagging behind, actually--it needs to be addressing the issues in people’s lives, the changing oppressions as well as the changing dreams and ambitions. And there needs to be a shift of style and way of engaging audiences. People are in need and audiences are ready for change. Can’t all happen at the polling places!”

Rich is the author of several books on film, including New Queer Cinema: The Director's Cut, and Chick Flicks: Theories and Memories of the Feminist Film Movement.

She is also the editor of Film Quarterly, the academic film journal of the University of California Press. Established in 1958, the peer-reviewed journal examines all aspects of film history, film theory, and the impact of film, video and television on culture and society.