Telling Stories That Haven't Been Told 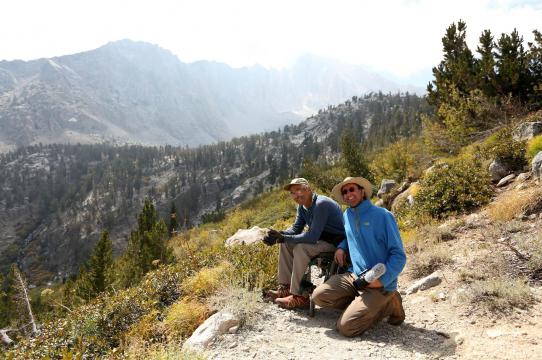 Tal Skloot followed Bob Coomber as he made his way up the steep trail from Onion Valley in the eastern Sierra toward the 11,700-foot Kearsarge Pass.

The path was narrow and twisting, dotted with stretches of rough scree and high rock steps designed to slow erosion. Still, most people could do the strenuous hike in half a day.

But Coomber was not most people, and Skloot, a film director and editor with 30 titles to his credit, wanted to chronicle the singular determination and strength required by this man as he spent day after day on the climb and gained 2,600 feet of elevation.

The result is a documentary film titled 4 Wheel Bob, which tells the story of Coomber’s passion for nature and for hiking despite the fact that juvenile diabetes caused his bones to become so brittle his leg once spontaneously shattered, which meant he was traveling the Kearsarge Pass trail in a wheelchair.

“I’m interested in stories that haven’t been told and that show a different perspective,” says Skloot (Stevenson ’88, classical music performance), who spent seven years on the Coomber project. “I think it (film) is a great way for people to learn about the world. “

Skloot’s filmmaking chops should be no surprise considering his father, Steven Skloot, was second-unit director for The Godfather and production manager for movies like Love Story and Live and Let Die.

Skloot, now 50, remembers being on the New Orleans set for the 1973 Live and Let Die and watching the filming of a chase scene in which a motorboat flies over a wedding reception.

“I thought it was amazing,” Skloot says of the shoot, “this whole setup for a piece of imagined reality. As a kid of 8, my mouth just fell open.”

Still, Skloot, who now lives in El Sobrante, did not intend to be a filmmaker. At UC Santa Cruz, he played classical guitar and studied music—although he often took out his Super 8 camera to make small movies, including a memorable film of an encounter between a slow-moving banana slug and an energetic spider. But after a few years of working as a gardener and woodworker to supplement his music and teaching gigs after graduation, he switched direction and attended the American Film Institute.

His time at UC Santa Cruz, however, taught him to think, to approach an idea holistically, and to put those thoughts into action, he says. His music degree also came in handy.

“A lot of music skills are integrated into filmmaking: rhythm and tempo and composition,” he says by telephone from Morro Bay where he was vacationing with his family. “There are parallels between film and music.”

Skloot’s twin passions of filmmaking and music are nowhere more evident than in a 2009 documentary he directed about a subculture of road-warrior symphony musicians whose cobbled-together freelance jobs meant they often logged as many hours on the road as long-haul truckers.

He’s also worked on films about brilliant mathematicians, 1960s Oakland, and the last days of a traveling carnival.

“I think when you make a film, you want to find something that’s interesting and has meaning,” he says.

For his 4 Wheel Bob movie, a short article about Coomber hiking Bay Area trails and a photo of Coomber backlit on a mountaintop piqued his interest. He met Coomber, who besides his hiking adventures is a council member for the city of Livermore, and they went for a hike.

“Something struck me emotionally about his story,” Skloot says. “It was the general concept about overcoming your limitations and facing challenges head on.”

Coomber, who had turned down another filmmaker who’d wanted to document his adventures, listened to Skloot’s proposal.

“He comes across as very honest and genuine,” Coomber says of Skloot. He agreed to the project.

Skloot followed Coomber as he led hikes and spoke to others who were disabled by accidents or illness. When Coomber decided to hike Kearsarge Pass, Skloot brought his cameras.

His crew captured Coomber struggling over the rock steps, sometimes dropping to the ground in order to lug the chair over the barriers. He filmed Coomber’s blistered hands, his conversation with birds and with the dogs he met on the trail.

“Sometimes seeing Bob struggle up the hill, it was hard not to help him,” Skloot says. “But I realized he had to do it on his own. That this was his personal struggle.”

The result is a film that Skloot hopes carries a universal message about facing challenges and the healing power of nature.

“I was deeply moved by being around Bob,” says Skloot who also teaches filmmaking at Diablo Valley College and Sonoma State University. “While Bob isn’t a fan of the word ‘inspiration,’ when you look at him doing these things and see the determination, and yet generosity, as he meets people, I was inspired to grumble a little less and try to do things that have meaning.”

The message of the film, Coomber says, is all about not giving up.

“Your situation might change so one day you go from walking to being in a wheelchair,” he says, “but you need to keep exploring your own limits. There’s a way to do damn near everything.”

4 Wheel Bob is scheduled to be screened Oct. 14 at the Santa Cruz Film Festival.