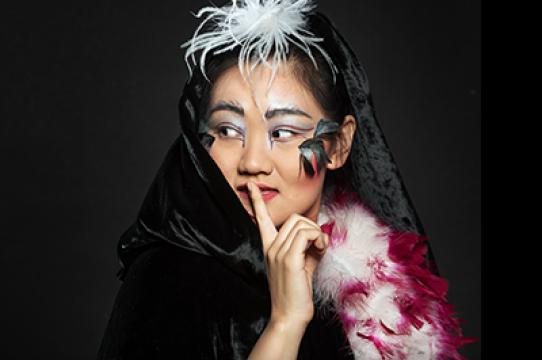 The UC Santa Cruz Music Department will present a fully-staged production of Mozart’s comic fantasy: Die Zauberflöte (The Magic Flute), May 31 through June 3, on campus at the Music Center Recital Hall.

Mozart’s last opera, The Magic Flute premiered at the Theater auf der Wieden near Vienna in 1792, just two months before his death. One of the most beloved works in the operatic canon, it will be sung in German with dialogues and supertitles in English.

“Over 100 people have worked to bring this production of Magic Flute to life: playing in the pit, singing on stage, creating complicated costumes, running the lighting board, coaching the German, designing posters, promoting our performances, and countless other essential tasks,” said Willey.

“We have been hoping to program a Mozart opera for quite some time,” she added.

“This music is remarkably accessible to young singers, and my colleagues and I are delighted to be able to provide this opportunity for our students. It has been a thrill to watch how our singers respond to this glorious score in which we are constantly finding messages small and large from the composer about characterization, stage direction, and how to express some of humanity’s most base and elevated emotions.”

UC Santa Cruz is also joining forces with the Academy of Art University in San Francisco to create costumes for the production. The Academy’s Alina Bokavikova explained how that partnership came about.

“The collaboration between Academy of Art University’s costume design program and UC Santa Cruz’s opera program began last year when I was asked to design UCSC’s 2017 production, Orpheus in The Underworld,” said Bokavikova. “Having recently been appointed to the position of costume design coordinator at the Academy of Art, I decided to extend this incredible design opportunity to our students for resume credit.”

“This experiment created a stunning work of art last spring, with exquisite production value and performances, so opera director Sheila Willey invited our students to return this year to design The Magic Flute.”

Exploring themes of chaos, order, and the natural world, The Magic Flute is basically a fairy tale, with themes of love and “good versus evil.”

Or as undergraduate dramaturg Magda Travis put it, “At its core, The Magic Flute is about enlightenment, and the effect that knowledge has on how we view the world around us.”

The Magic Flute will run from Thursday to Saturday, May 31- June 2, beginning at 7:30 p.m. There will also be a Sunday, June 3, matinee starting at 3 p.m. All performances will take place at the Music Center Recital Hall. Tickets are available now at ucsctickets.com.