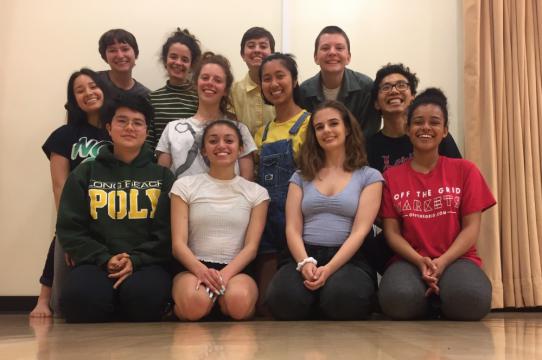 This summer, a very talented group of 13 UC Santa Cruz dance students will go to camp. But not in the typical way. This camping trip, based at the Centre National de la Danse, will bring together students and choreographers from all over the world.

Called “Camping”, the program, which takes place in Paris, France, provides an international platform where artists from a variety of disciplines can attend classes, talks, film screenings, and presentations with their involvement in dance as the central unifying theme. The program includes not only students, but teachers, performers, choreographers, and researchers as well as dance enthusiasts and spectators.

“This environment will give our students an incredible experience as they are immersed in a new and dynamic community of artists,” said Gerald Casel, associate professor of dance and the associate chair of Theater Arts at UC Santa Cruz who has been instrumental, for the second year in row, in getting UCSC students involved. “Here they will network, practice, and research with a vast collective of students in attendance, some of which will remain peers and collaborators beyond this conference.”

Each student will be attending two weeks of workshops with world-renowned choreographers and will have the chance to attend peer-led classes with the other schools in attendance. UC Santa Cruz also will have the opportunity to perform an original 30-minute piece that the students have been developing.

“As the only research-based institute in attendance among conservatories and arts universities, we are hoping to represent this intersection of dance and research as we experience this in our own educations,” said Casel, who will accompany the group at Camping.

The students have also been busy fundraising to finance the trip with a GoFundMe campaign. They were given a grant by the UC Santa Cruz Arts Division and are still in need of funds to augment their costs of round-trip airfare, housing expenses, and workshop fees.

“The impact of dance has been astronomical in my life and ultimately has guided me into pursuing this [psychology] practice and research beyond college in the form of somatic-based therapy,” said student Megan Schneider. “Camping will be a great way to begin my post-grad work and I am so very grateful to have the opportunity to participate!”

Dance lecturer Cid Pearlman will also accompany the students during their time in Paris.

“Dance helps me to learn more about my body, especially to connect with the unspoken history and the way of life of my ancestors,” said Thomas Ng. “I am looking forward to learning about effective strategies in making dance more accessible to marginalized/minority groups at this conference.”